Turning on the lights

ESSENTIAL QUESTION: What is the history of electricity?

Wide-spread electrification was one of President Franklin D. Roosevelt’s relief projects announced January 4, 1935, to help the nation recover from the Great Depression. The following April, Congress apportioned $100 million for the project, and the next month, Executive Order 7037 created the Rural Electrification Administration (REA).

At the request of South Carolina Governor Olin D. Johnston, who had met with President Roosevelt, the South Carolina General Assembly in 1935 created the short-lived State Rural Electrification Authority. The agency’s mission was to extend lines from existing power companies to rural areas. The authority was shut down six years later, amid criticisms of overcharging consumers and limiting service. South Carolinians knew they could get lights only by securing them on their own. They took the relief project into their own hands. The electric cooperative revolution was born. 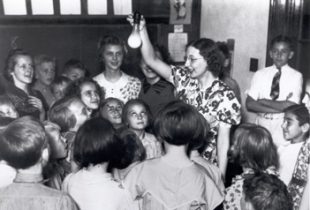 A teacher demonstrates how a light bulb works in a rural classroom.

Who invented and/or improved the light bulb?
What are electric cooperatives and what is the history of them in S.C.?

South Carolina fifth grade students study the industrial revolution and how it contributed to the United States becoming a world power. We believe that understanding the history of electricity, including the inventors, the advancements and the birth of electric cooperatives, helps students become energy literate and helps South Carolina become more energy efficient.

ESS3.C: Human Impacts on Earth Systems Human activities in agriculture, industry, and everyday life have had major effects on the land, vegetation, streams, ocean, air, and even outer space. But individuals and communities are doing things to help protect Earth’s resources and environments.

Standard 2: Demonstrate an understanding of how international events and conditions during the early 20th Century (i.e., 1910–1940) affected the United States and South Carolina.

Enduring Understanding: In the early 20th Century, the economies of the United States and South Carolina experienced a boom-and-bust period. This situation led to significant government intervention in order to stimulate the economy.

5.2.P Summarize how the role of the federal government expanded during the period.
This indicator was developed to promote inquiry into how wartime government activities, the Progressive Movement, and the New Deal represented an expansion of federal power, including attempts to protect citizens.

5.2.CX Contextualize the post-war economic climate on the cultural landscape throughout the United States and South Carolina.
This indicator was developed to promote inquiry into post World War I changes in the U.S., including the “Roaring Twenties,” the Harlem Renaissance, the role of women outside of the home, and cultural changes for African Americans.

5.2.CC Examine the continuities and changes that resulted from New Deal programs and the impact these programs had on various groups throughout the U. S. and South Carolina.
This indicator was developed to promote inquiry into how the role of the government expanded during the Great Depression through the implementation of government programs. The indicator encourages inquiry into New Deal programs such as the Federal Deposit Insurance Corporation, Civilian Conservation Corps, Social Security Administration, Securities and Exchange Commission, and Tennessee Valley Authority.

5.2.E Evaluate multiple perspectives from the period, including the economic, political, and social impacts of World War I, the 1920s, the Great Depression, and the New Deal using primary and secondary sources.

LEARN ABOUT OUR ENERGY COMPETITION
RESEARCH GRANTS AND OPPORTUNITIES