How is energy generated? 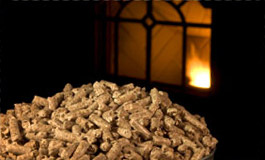 Biomass energy is a renewable, homegrown energy source that includes trees, farm crops, manure, plants and landfill gas. In the US biomass sources create 3.4% of all the energy we use. In S.C., we use biomass to create about 1.8% of the energy we use.

When it comes to things such as cars and trucks, 1.5% of the fuel we consumed in SC was ethanol and biodiesel (between July 2007 and June 2008). That low amount could be higher because SC has lots of biomass resources like corn fields. But right now, biomass isn’t very affordable.

Coal creates more than half the electricity consumed by Americans. In fact, one quarter of the world’s coal reserves are in the United States. And the energy content of that coal is more than all the world’s known recoverable oil.

Find out more about the future of coal and the generation of electricity.

Natural gas is domestic and readily available to utilities through an existing infrastructure. And, because of economic, environmental and technological changes, along with its clean-burning nature, natural gas has become the fuel of choice for new power plants. It’s also become increasingly popular as an alternative fuel for transportation in everything from cars to city busses.

How’s it work? Gas turbines and combustion engines are also used to generate electricity. In these types of units, instead of heating steam to turn a turbine, hot gases from burning natural gas are used to turn the turbine and generate electricity. Gas turbine and combustion engine plants are traditionally used primarily for peak-load demands, as it is possible to quickly and easily turn them on. These plants have increased in popularity due to advances in technology and the availability of natural gas. 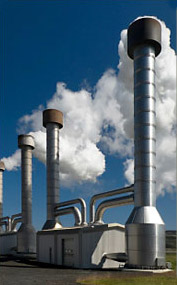 All over the planet, there are underground reservoirs of steam, hot water and hot dry rocks called geothermal energy. There are different strength geothermal reservoirs, too.

South Carolina is not a good candidate for large scale geothermal electric production because there are no shallow sources for geothermal heat hot enough to create steam. 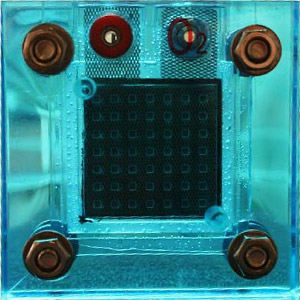 Actually, hydrogen is really an energy carrier, but hydrogen can create power. In what’s called a fuel cell, the chemicals hydrogen (H) and oxygen (O) are converted into water (H2O) and in the process, electricity is created.

It has great potential as an environmentally clean fuel and as a way to reduce reliance on imported energy sources.

But before hydrogen can play a bigger energy role and be used as an alternative to gasoline, there’s a lot that has to be done:

Work has already begun to make hydrogen energy an alternative in South Carolina. To find out more, follow these links:

Nuclear power generates 31% of the electricity used in South Carolina and about 19% of the total electricity generated in the United States. That’s about the same amount of electricity that California, Texas and New York use.

A nuclear power plant operates and generates electricity pretty much the same way as a fossil fuel plant, with one difference: the source of heat. In a fossil fuel plant, burning fuels such as coal generates heat. But in a nuclear plant, fission (the splitting of uranium atoms) generates heat. Then, that heat is used to boil water. The boiling water makes steam. Steam spins a turbine generator, and the generator makes electricity.

So, let’s break it down. First, we have to have heat. The part of the plant where the heat is produced is called the “reactor.” At the center of the reactor is the core, which uses uranium fuel pellets to make heat. Uranium fuel is powerful stuff. Just one uranium fuel pellet the size of a fingertip makes the same amount of energy as 150 gallons of oil.

These energy-rich pellets are stacked end-to-end inside fuel rods that are 12 feet long. Then the fuel rods are bundled together to make a “fuel assembly.” As the uranium atoms in the pellet split (through fission) by particles known as neutrons, heat is created by this chain reaction.  One of the ways to keep the reaction under control is to insert control rods into the fuel assembly which absorb the neutrons.

Making electricity after that is simple. The heat is used to boil water and make steam. The steam turns huge turbine blades and, as they spin, they drive generators that make electricity. Afterward, the steam is changed back into water and cooled in a separate structure called a cooling tower so it can be used again and again. 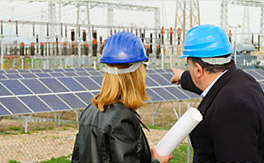 Unlike fossil fuels, solar energy is available anywhere on earth. Solar energy can provide heat, cooling, lighting, mechanical power and electricity for other appliances such as your stove, hot water heater and washing machine. It’s a good source of power for individual homes. The state of South Carolina is not well suited for large-scale commercial solar electric generation because the it lacks the wide open land area and the right mix of temperature and unfiltered direct sunlight to make solar power cost effective.

Solar cells, also called photovoltaics or PVs by solar cell scientists, have been used to power everything from simple watches and calculators to homes in areas where it is expensive or impossible to send electricity through power lines. As consumers become more interested in this technology, an increasing number of power companies are experimenting with PVs to generate electricity.

So how does solar energy work? PV technologies produce electricity directly from sunlight. When sunlight strikes a solar cell, semiconductors absorb a portion of that light. When the energy from the absorbed light strikes electrons, the electrons are freed from their parent atoms. Freed electrons then travel into a circuit in the form of electricity. Then all you have to do is flip the switch to turn on the light.

The most common PV device is made from rigid, crystalline silicon solar cells, but other materials can also be used. About 40 of these cells are usually combined to produce a flat module – or more commonly known as a “solar panel.” About 10 of these modules (solar panels) form a PV array, which can measure up to several yards on each side. The PV arrays can be mounted at a fixed angle facing south, or they can follow the sun to capture the most sunlight over the course of a day.

There is excellent potential for solar energy in other parts of across the United States because PV systems use both direct and scattered sunlight. However, the amount of electricity generated by a PV system depends on how much of the sun’s light reaches it. Where’s the best place for solar in the United States? In the Southwest, which receives the greatest amount of solar rays. 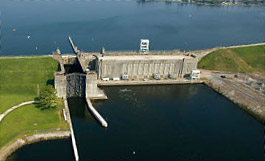 Generating electricity using water has several advantages. The biggest advantage is that water is a source of cheap power. And, because there is no fuel combustion, there is little air pollution compared to fossil fuel plants and limited thermal pollution compared to nuclear plants. Like other energy sources, the use of water for generation has limitations, including environmental impacts from damming rivers and streams, which affects the habitats of the local plant, fish and animal life. Water you waiting for? Learn more about hydropower.

Wind is really a form of solar energy. That’s because the irregularities of the Earth’s surface and the rotation of the earth cause the sun to heat our atmosphere unevenly. Wind is modified by the Earth’s terrain, bodies of water and vegetation. We use this wind flow, or motion energy, to sail, fly a kite or even generate electricity.

In South Carolina, Santee Cooper, Coastal Carolina University and the South Carolina Energy Office recently launched weather buoys that will measure wind off the coast of Georgetown and Little River.

Six buoys and two land-based stations will measure wind speed, direction and frequency at stations up to six miles out into the ocean.

The buoy deployment will be followed by Santee Cooper’s installation of an offshore platform near one of the buoy paths. Scientists from Coastal Carolina will evaluate the buoy data to help pinpoint the best location for the platform, which will measure upper-level winds more similar to those a wind turbine would encounter. The offshore wind platform is expected to gather data for at least a year.