ESSENTIAL QUESTION: What are the various types of light bulbs and how efficient are they?

A comparing light bulbs activity
A comprehensive light and energy unit from Power Sleuth in Maine
Learn the distinction between energy conservation and energy efficiency
Renewable Energy Curriculum from TVA
A Project Learning Tree activity where students conduct an audit of their energy use and devise a plan to reduce it
"Facts of Light" from NEED
An energy guide for anyone interested in energy education from the U.S. Department of Energy
Green energy challenge
Energy activities from Alaska
Path of Electricity worksheet
What is energy? (lesson plans)
Energy Efficiency
Household Energy Conservation and Efficiency
Energy 101 Video Series
Solar Decathlon Resources
History of Light Bulbs

Do the light switch

An easy way to be more energy efficient in your home is to replace light bulbs. Using light-emitting diode bulbs is one small change we can all make to save electricity and save money at the same time.

What is an LED?

Light-emitting diodes, or LEDs, are small light sources illuminated by movement of electrons through a semiconductor material. They offer similar light quality to traditional incandescent bulbs, last 25 times as long, and use even less energy than compact fluorescent lights.

In addition to standard screw-in bulbs, you’ll find LEDs in desk lamps, kitchen under-cabinet lighting, digital displays and even holiday light strings. LEDs are available in a variety of colors, and some are dimmable or offer convenient features such as daylight and motion sensors.

LEDs provide more light per watt than any other energy-saving bulb, making them the most efficient option available. Typically in a well-designed product, LEDs are cool to the touch. And unlike CFLs, they do not contain mercury, which makes them more environmentally friendly.

Where to Use LEDs

Considering the cost of LEDs, replacing every bulb in your home may not be practical. However, installing them in locations that are least accessible is a good idea. This will cut down on maintenance since they last longer than incandescents and CFLs. To see the most energy savings, install LEDs in your most heavily used fixtures as it is not cost effective to use these in rarely used closets or basements.

LEDs are ideal for outdoor lighting because of their durability and performance in cold environments. Look for LED products, such as pathway lights, step lights and porch lights.

By replacing just one incandescent bulb with an energy-saving LED, you will: 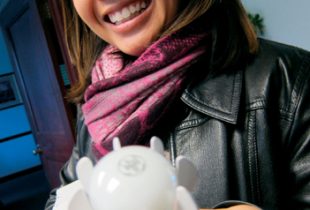 LED light bulbs like the Energy Smart model from GE use between 75 and 80 percent less energy than classic bulbs.

What is the difference between energy conservation and energy efficiency?
Can changing a bulb really matter?
What are ways to become more efficient with our energy use?

South Carolina students in fourth grade learn about light and electricity. One of the simplest ways to become energy efficient is to replace old incandescent light bulbs with more energy-saving ones. Here is a collection of activities that focus on understanding the different types of light bulbs and how this small step can lead to big savings.

4-PS3-2. Make observations to provide evidence that energy can be transferred from place to place by sound, light, heat, and electric currents.

PS3.A: Definitions of Energy Energy can be moved [transferred] from place to place by moving objects or through sound, light, or electric currents. NRC Framework Link.

PS3.B: Conservation of Energy and Energy Transfer Energy is present whenever there are moving objects, sound, light, or heat. When objects collide, energy can be transferred from one object to another, thereby changing their motion. In such collisions, some energy is typically also transferred to the surrounding air; as a result, the air gets heated and sound is produced. Light also transfers energy from place to place. Energy can also be transferred from place to place by electric currents, which can then be used locally to produce motion, sound, heat, or light.

4-PS3-4. Apply scientific ideas to design, test, and refine a device that converts energy from one form to another.

PS3.B: Conservation of Energy and Energy Transfer Energy can also be transferred from place to place by electric currents, which can then be used locally to produce motion, sound, heat, or light. The currents may have been produced to begin with by transforming the energy of motion into electrical energy.

4-ESS3-1. Obtain and combine information to describe that energy and fuels are derived from natural resources and how their uses affect the environment.

ESS3.A: Natural Resources All materials, energy, and fuels that humans use are derived from natural sources, and their use affects the environment in multiple ways. Some resources are renewable over time, and others are not.

LEARN ABOUT OUR ENERGY COMPETITION
RESEARCH GRANTS AND OPPORTUNITIES