What is electricity and how is it generated in South Carolina?

Electricity is the flow of electrical power or charge. It is a secondary energy source. That means we get it by converting primary sources such as coal, natural gas, oil, nuclear power and other natural sources into it.

What follows is a breakdown of the electricity produced and consumed in South Carolina by the method of how it’s generated. The information is provided by the S.C. Energy Office: 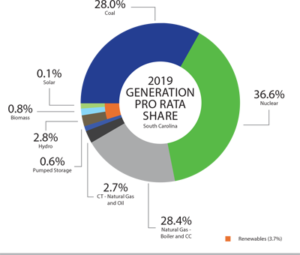